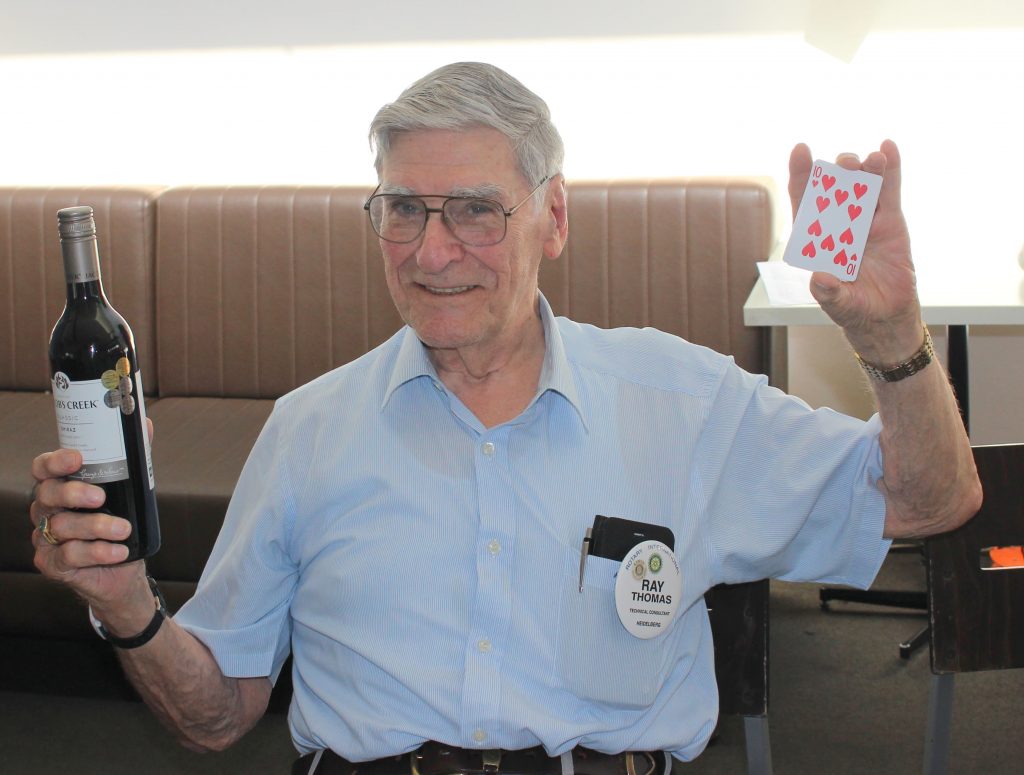 A much regarded member of the Rotary Club of Heidelberg has passed on. One of our members, Smokey Dawson attended his service and gave this part of the eulogy.

“I would like to begin by thanking Rhonda for inviting me to speak today.It is indeed an honour to be able to say a few words about such a great man as RAY DRUMMOND THOMAS.

I first met Ray about 12 years ago when I was asked by the Rotary Club of Heidelberg to help them with a large fundraising they had organised.We immediately hit it off in the true Aussie mateship tradition.
To this day,I’m still not sure how I saw Ray as part of my life. Was he a father figure? We first met 12 months or so after my Father had passed away. Was he the older brother I never had?

One thing I know is that we were great mates.There is a lot to be said for the Aussie Mateship Tradition. Ray was inducted into The Rotary Club of Heidelberg on 1st June 1988 and was a much valued member of the club even though his disabilities, in recent years, made it difficult for him to contribute to the more physical activities of the club.

Ray obviously had an amazing working life over many years upon which other will comment in greater detail. For several years he had a most successful business in Taiwan which meant he made 3 or 4 trips a year to check on how things were going.Such was his influence he convinced Mrs. D and I that we should visit Taiwan while he was there. We went on Shelagh’s Birthday in 2016 and she was welcomed with a birthday cake. Even in a foreign country he was the perfect host.

When Paul Harris founded Rotary early in the 20th Century it was on the basis of The 4 WAY TEST of things we say or do:
1.Is it The TRUTH
2.Is it FAIR to all concerned
3.Will it build GOODWILL and BETTER FRIENDSHIPS
4.Will it be BENEFICIAL to all concerned.

I don’t know anyone who has ever conducted their life adhering to these tests more meticulously than Ray.
Ray Drummond Thomas thank you for your friendship and the wonderful times we shared together. Until we meet again Goodbye and God Bless”.