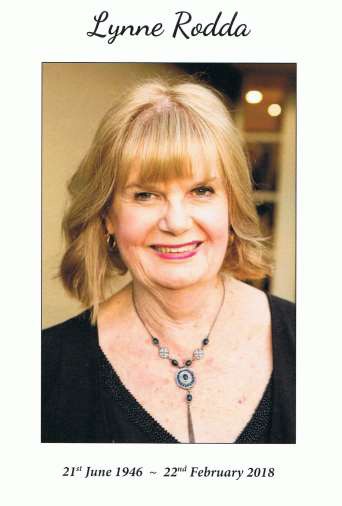 As most members will know Lynne passed away at approximately 1.00am on Thursday morning after a two year struggle with multiple myeloma.

Whilst I only met Lynne when she joined Rotary in 2004 it quickly became clear that she, throughout her life, was a woman of great spirit, of sharp mind and of high ethics.
She was proposed to the Club by her then business partner Max Campbell who also had the same personal attributes.

She was our first female member and our first female President (2012-2013) and has acquitted herself admirably in those roles. The presentation to her in 2015 of a Paul Harris Award followed by two second awards, one from the club and the second from District for her work in organising the 2016 district conference is testament to her dedication to Rotary and her professionalism in what she did. On the final day of the 2016 conference ( which due to severe muscular back pain she only got through with heavy doses of analgesics --what a misdiagnosis) a District Governor made this comment ( amongst others) "District Conference was in real trouble, you have saved it and you have set the bar so high at this conference I am not sure anyone else will be able to achieve it". We all, as a club, certainly pulled together, but Lynne drove it for which we have much to thank her for.

Lynne was not unused to physical pain and suffering. She had been a cancer survivor in her thirties and also survived being hit by a car in Bell Street ( having been thrown 25 feet) about 10 years ago.

Her upbringing was not one of privilege, in fact the exact opposite. Everything she achieved in life was through hard work, a keen mind and the fortitude to stand up for, and express her beliefs and opinions. Her ethical compass was to be admired and I know that on a least one occasion she put those ethics above a highly lucrative position.

Of course, our condolences go to her children Greg and Gavan as well as their respective families. The family has been at Lynne's side since her diagnosis and she couldn't have wished for more loving attention -Lynne's grandchildren were her pride and joy and she spoke to me of them regularly.

I, and others, joked (sort of) after District Conference with Lynne about how good a District Governor she would have made and that we would put her name forward. Her retort was “are you out of your mind -- no way " - and she meant it -- however had she not become ill I am sure that would have happened in time .

Lynne was a hard working, committed, valued member of the Club and she will be sadly missed as a colleague, friend and confidant.