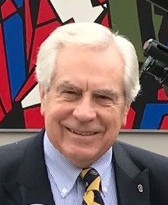 FOCUS 19
As they say “turn up and you are half way there” ……Well -those members, family, friends, visiting Rotarians from Preston, Ivanhoe and a host of Rosanna members plus a potential new member or two, who turned up enjoyed a fun filled evening at the Rosanna Bowling Club for our Oaks Eve Dinner Meeting last Wednesday.The generosity of spirit and wallets was just fabulous, confirming our belief in friendship driven service, which these days seems to require so much more funding.From the first those in attendance seemed determined to have a good time, lots of people moving around, mixing with old and new friends, and lots of laughter –there’s something wonderful in the spirit of laughter!

A highlight of the evening was the effort people had taken in their attire –Kent Goodwin in Black Tie and Dinner Suit, how he missed out on the award for “Best Suit on a Man” I don’t know. That award going to Bow Tie Tice! The Godolphin Stables were represented by Bruce Nichols in Arabian inspired attire winning him “The Most Outrageous Outfit” award.And Doreen and Wayne picked up the “Best Dressed Couple”-I think it was the corsage attached to Wayne’s hat which tickled the selectors.

A very special thank you to Honorary Member Neil Wilson who puts in so much time and effort not only on the night, keeping the buzz going, but also leading up to the event. As a focus of the evening, for a lot of attendees, the Oaks Auction is great fun and well handled by Neil as the auctioneer, which the total pot demonstrated.Final numbers are not confirmed, however I believe, after all outgoings, we probably generated $2,000.00 which we will split between ARH and Rotary 2019 Drought Relief Fund. A very big THANK YOU to all concerned.

NEXT –Let us see if we can’t replicate the same energy and even more commitment to making the Charity Golf Day an even greater success than last year. It is these events that allow us to generate sufficient funds to allow your club to be generous in support, on behalf of Rotary, to those in need within our broader community.