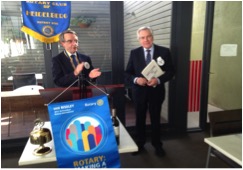 As we often repeat, the best speakers
often come from our own midst and last
week was no exception as one of our
newest members Noel Sturgeon gave his
“Rotarian Behind the Badge” address. Not
only did we learn a lot about the man and
his story, but he also entertained us with
anecdotes and humor. It is a wonderful
tradition which we should not only continue
for our new members, but also for our
older members who can share and update
their own stories.
We have been approached by Metro
Trains to run BBQs at stations in October,
during the disruption to services caused by
the upgrades between Heidelberg and
Rosanna. They suggested Clifton Hill and
Victoria Park which would have been
better suited to local Clubs. Instead we are
looking at Macleod Station on Friday 13
October between 4.00 and 7.00
pm. We have given a tentative ok, so we shall be
looking for helpers. Please let Kent know if
you can help.
For those who weren’t there last week, a
reminder that we are not meeting at
Vaskos this week, but at the RSL on Bell,
which is in Bell St, opposite the Repat.
Back to Vaskos next week and a reminder
about Hat Day the week after.
President Tony