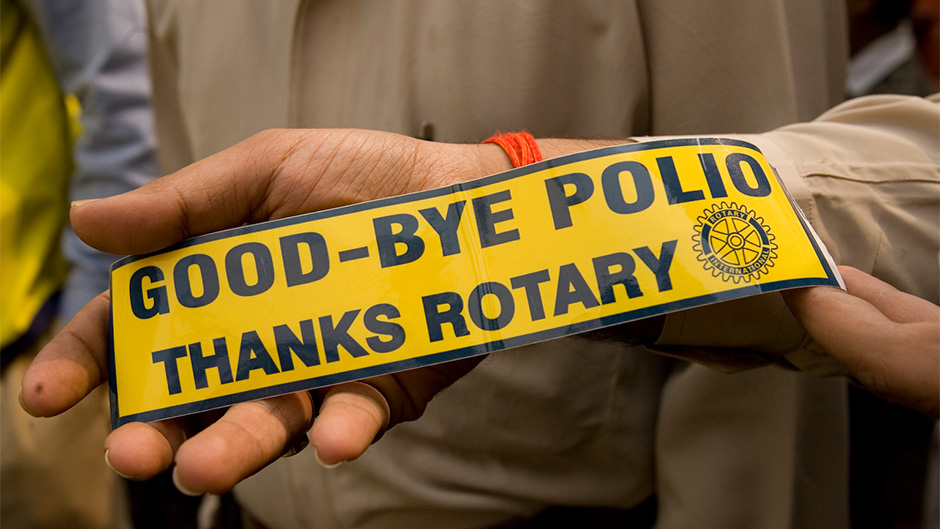 The world is now more than 99% polio-free.

Polio cases have declined rapidly since 1985, but the fight isn’t over. Polio is a crippling and potentially fatal infectious disease, and for as little as US$0.60, a child can be protected against the virus for life. If we don’t finish the fight right now, more than 10 million children under the age of five could be paralyzed by polio in the next 40 years.

Since Rotary helped launch the polio eradication initiative, polio cases have fallen from 350,000 a year in 125 countries to just a handful in only three countries.
Rotary’s Role

Rotary clubs take on a project to buy and help deliver polio vaccine to more than six million children in the Philippines.
1985

Rotary International launches PolioPlus, the first and largest internationally coordinated private-sector support of a public health initiative, with an initial pledge of US$120 million.
1988

Rotarians raise US$247 million for PolioPlus, more than double their fundraising goal of $120 million. The World Health Assembly passes a resolution to eradicate polio, setting up the launch of the Global Polio Eradication Initiative. More than 125 countries are polio-endemic.
1991

Last case of wild poliovirus in the Americas.
1994

The Western Hemisphere is declared polio-free.
1995

Rotarians, health workers and volunteers immunize 165 million children in China and India in a single week. Rotary launches the PolioPlus Partners program, enabling Rotarians in polio-free countries to provide financial support to their fellow Rotarians in polio-affected countries for immunization campaigns and other polio eradication activities.
1996

The number of nations declared polio-free increases to 150. The reported incidence of polio is 85 percent less than in 1988.
1997

The last case of wild polio occurs in the Western Pacific Region. She is a 15-month-old girl called Mum Chanty living near Phnom Penh, Cambodia.
2000

The number of polio-endemic countries drops to four (Afghanistan, India, Nigeria, Pakistan), the lowest in human history at the time.
2009

Rotary’s overall contribution to the eradication effort nears US$800 million. In January the Bill & Melinda Gates Foundation pledges US$355 million and issues Rotary a challenge grant of US$200 million which becomes known as Rotary’s $200 Million Challenge. This announcement will result in a combined US$555 million in support of the Global Polio Eradication Initiative.
2011

India surpasses an entire year without a recorded case of polio, and is taken off the polio endemic list. Only three countries remain polio endemic. Rotary surpasses its $200 Million Challenge fundraising goal more than five months earlier than planned.