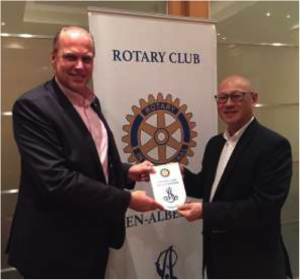 Makeup last night (Wed 25 Oct) at Rotary Club of Wien-Albertina in Vienna.
They made me feel quite welcome but unfortunately for me, other than my
introduction, the entire meeting including guest speaker, was conducted in
German.

Their club is in District 1910 and was formed about 24 years ago in 1993. I
think their membership is around 60. The club takes its name from the
Albertina which is a grand Viennese palace which now houses one of the
worlds finest art collections. The palace takes its name from its founder
Duke Albert of Saxe-Teschen and hence the “AS” logo on the club’s banner.

The meeting was held in the Hilton Hotel Vienna and dinner was the hotel
buffet which was a large selection for both savoury and sweets. The cost of
25 EUR included one drink.

I’ve attached a photo of Club president Reinhard Backhausen presenting me
with their club banner. He asked if I had one but unfortunately I was unable
to reciprocate (comment: what is our club doing about banners?)