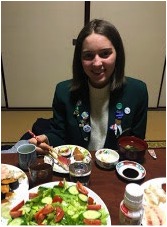 I have been in Japan for two and a half months now, but it feels like it has been a lifetime, partly due to having had so many great new experiences and partly due to every week feeling like a decade in terms of the pandemic situation. Despite the insanity of the past few months, I have been having an amazing time here and am excited for the rest of the year to come.

When I arrived in Japan my host family and a whole team of Rotary people greeted me at the airport with an Australian flag and a lots enthusiasm, despite me taking forever to get off the plane. We then all went to get udon for lunch and meet the rest of the inbounds. I was completely exhausted after travelling for twelve hours, meeting so many new people and attempting to speak Japanese for the day, but it was a great start to my exchange.

The Monday after I arrived in Japan, I started school with my host sister at Keiai High school. School here is very different to Australian school in so many ways, from the ridiculous number of shoes required to get through one day of school to the complete lack of technology in the classroom (they still use blackboards here!). I understood almost nothing in the classes so in addition to just smiling blankly and daydreaming, I have been able to spend time studying Japanese during class. My favourite class here is P.E. which is a bit of a shock because I have never been a sporty person, but as a good understanding of Japanese is not needed to play a game of basketball, I was able to fully participate and have a lot of fun in that class. I am the only exchange student at my school which meant I was the subject of a lot attention from the other students, which was a bit daunting at first, but it did make it easy to make new friends. Through school in Japan I have learnt a lot, both about Japanese culture and language, despite understanding nothing in class.

For the last month, due to the corona virus, I have had no school, and have been in a period of mandatory social distancing. It is difficult to know what is going on in Japan in relation to COVID-19 due to the lack of testing, but at the moment things seem to be looking up, and I will be able to return to school next week. The restrictions here have, thankfully, been lighter than what they are at the moment in Victoria, so I have still had the opportunity to travel around the area with my host family during the month long “holiday”, and the shops and restaurants have remained largely open, so I have been able to spend some time beyond the house which is always fun.

It has been a difficult time in some respects, and I am very thankful I am able return to school soon, but it has also been a great opportunity get to know my host family more and improve my Japanese skills. During this time I made origami and jewellery together with my host family, celebrated Girl’s Day, made udon noodles and mochi with my host grandmother, ate many matcha soft creams, and started Japanese classes with a member of my host rotary club. One of my favourite things to do during this social distancing period has been going on walks and visiting the local shrines in the area, I have counted visiting seventeen different shrines over the time I have been here, and they have all been incredibly beautiful.

Some of my favourite experiences of the exchange have been the trips I have taken with my host family. One of such trips was the visit to Hiroshima few weeks ago to see the Miyajima shrine. We woke up 4:20am in order to get to Miyajima shrine before the crowds. It seemed ridiculously early at the time, but I am glad we did; we seemed to come at the perfect time and could enjoy it before all the other tourists came. Miyajima shrine is built on water and is known for the beautiful torii gate that stands the ocean in front of it. Unfortunately, as we discovered when we arrived, the torii gate was covered in scaffold, undergoing its repairs that occur once every eighty years. This was at first disappointing, but my host mother did point out that having the scaffold was even more exciting as it made it a once in a lifetime experience. So, we visited the shrine, which was beautiful, and looked out at the grey box that supposedly had a famous torii gate inside it, before visiting the shops eating a tremendous amount of the traditional sweet of the area called Momijimanju.

I also recently went to Beppu, Oita with my host family to visit the onsens (hot springs) there. We ate the traditional foods of the area including eggs boiled in onsen water, and Beppu pudding. The scenery there was amazing with Oita’s mountainous landscape, and its many fountains of steam coming out of the ground. We stayed at a traditional Japanese hotel, where we slept on futons in a tatami room and wore Yukatas (summer kimonos). The onsen was outside and it had snowed that day, so I was half absolutely freezing and half boiling hot, which Japanese people seem to consider the perfect conditions for a relaxing bath. The next day we visited Usa Shrine, which is the oldest and largest shrine in Kyushu, and is the most beautiful of the shrines I have been to. It was very quiet, and we had almost shrine almost entirely to ourselves.

It has also been great getting to know the other inbound students through Rotary activities, meetings and orientations. The highlight so far of my experience with my Japanese Rotary district was going to a tea ceremony with the other inbound students. It was very interesting to participate in the ceremony (and there was lots of good food to eat there!). Afterwards, we went to a sword-making house saw a Katana sword being forged, and then used to cut through sticks of bamboo. I decided not try slicing bamboo with the Katana as I was certain I would accidentally take someone’s head off, but it was very fun to watch.

I would like to thank District 9790 and my sponsor club so much for firstly, for giving me the opportunity to go on exchange but also for working through the difficult times of the corona crisis and allowing me to stay on exchange. I am so glad to still be here due to your efforts.