The guest speaker who we had arranged for
today, namely Louise Milligan, has had to
withdraw due to work commitments. Hopefully
she will be able to attend in the not too distant
future. Fortunately we have a more than
capable replacement, Emma Di Luca who will
present a Rotarian Behind the Badge address.
How do you describe Rotary when you are
talking to a potential member or to somebody
who asks about your badge or you are going
for lunch on Monday? It is easy to start by
saying that it is a charity and describing Polio
Plus. We also need to be able to describe
some of the work our Club has done over
many years at various levels. An obvious
example is our long-term involvement with the
ONJ Centre, and cooking snags at the fun run
etc. We have also been involved with the
Exodus Community and various other local
organisations including our recent meeting at
the RSL on Bell where we donated towards
their fundraising for the purchase of a
community bus. Every year we seek nominees
for the RYLA program and the National
Science Summer School. It is important to
make it clear that Rotary is also a lot of fun,
with a wide range of guest speakers every
week as well as social activities from time to
time. If you are talking to somebody who
expresses interest then invite them to one of
our meetings as a guest so that they can see a
little of what Rotary is about.
It is incumbent upon us all to try to introduce
new members to our club. I challenge every
one of you to bring a potential new member
along before Christmas.
President Tony

The trouble is you think
you have time
-Buddha 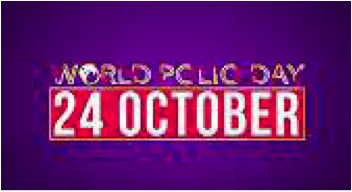 Rotary, the World Health Organization, UNICEF and the Centers for Disease Control and Prevention launched the Global Polio Eradication
Initiative in 1988. In 2007, the Bill & Melinda Gates Foundation joined Rotary in its commitment to ending polio.
Since 2013, the Gates Foundation has matched every $1 Rotary commits to polio eradication 2-to- 1, up to $35 million per year. Rotary, with matching funds from the Gates Foundation, has contributed
more than $1.6 billion to end polio.
Since we started the fight against polio, we’ve reduced the number of polio cases by 99.9 percent
and reached more than 2.5 billion children with the vaccine. There are fewer polio cases today than ever before, but we will not stop until we reach zero. If polio is not eradicated, hundreds of thousands of children could be paralyzed. Global health care costs would rise dramatically, and many children’s quality of life would be drastically diminished. 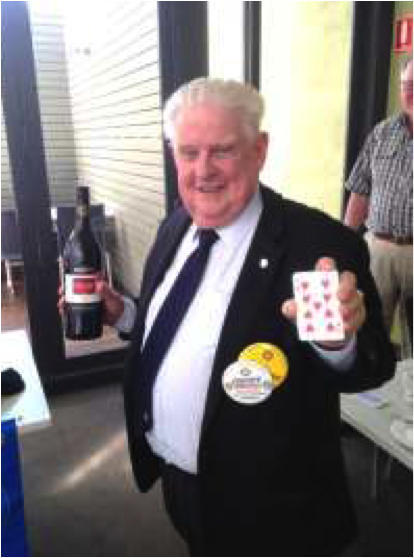 Geoff won the bottle but left it
for the speaker

To The President & Members
of Rotary
I am humbled by the fact that you
made a lovely gesture sending
me Flowers at Rehab.
My Room was rather drab as
was its Occupant. Then those
glorious blooms arrived, and all
of a sudden the world seemed a
better place.
Thank you so much,
Sincerely
Elaine Chester
My recovery has not been
without its hic-cups, but hopefully
Santa will find me full of
Christmas Cheer on or around Dec 25.

(See Rodger if you can help)

PROFESSOR JOHN ROYLE OAM
Deep Vein Thrombosis (DVT)
Our speaker last week was Professor John Royle OAM,
who gave a very technical and medical talk on DVT,
pulmonary embolism, after air travel. John comes with a
rich medical history.
This is a subject that can affect all people, particularly of
mature age, who make long air flights, which have now
become so popular, as extensive air travel and overseas
holidays, have become relatively cheaper.
Lack of mobility during these flights should be noted.
The simple way and solution is to wear knee stockings,
which compress the veins, and make the blood move
quicker; the slow blood is the cause of Deep Vein Thrombosis.

Where possible the passengers should undertake
basic exercises during the flight, i.e. stretching legs
and if possible, walking up the isles, i.e. officially to
the Toilet.
If landing at Airports en route, go for a brisk walk
around the public areas, and use the toilets.
Is there a lesson to be learnt, which may predispose
us to clots? We have hundreds of thousands of
people travelling long distances by bus and by car.
There is not an epidemic of DVT’s in them. The
most obvious difference is the degree of mobility, or
lack of mobility. However on a plane there is also
dehydration – the air circulated through the plane is
dry, and therefore every passenger is steadily dried
out.
The air breathed out is saturated with water vapour,
and the air breathed in has none. Alcohol, tea, and
coffee all tend to produce dehydration.
Dehydration, “thickens the blood”, and hence
causes the problems leading to DVT.
We note extreme notable cases in history of DVT,
e.g. Richard Nixon, former President of the United
States, who suffered badly following a flight from
Salzburg to Cairo and Moscow, and our own Austin
Doyle, from the Austin Hospital, who literally died,
when he reached New Zealand, from DVT.
Many Medical and Civil Authorities, and airports
throughout the world, e.g. Charles de Gaul in Paris
have undertaken extensive research into DVT, and it
is paying dividends.
We thank John Royle for his in depth talk to the
Club. Many of our members have travelled
extensively in recent times; hope this is a lesson to
all members, and their families of the Rotary Club of
Heidelberg, with its practical outcomes.
MAX CHESTER OAM,
WITH THE ASSISTANCE OF JOHN ROYLE